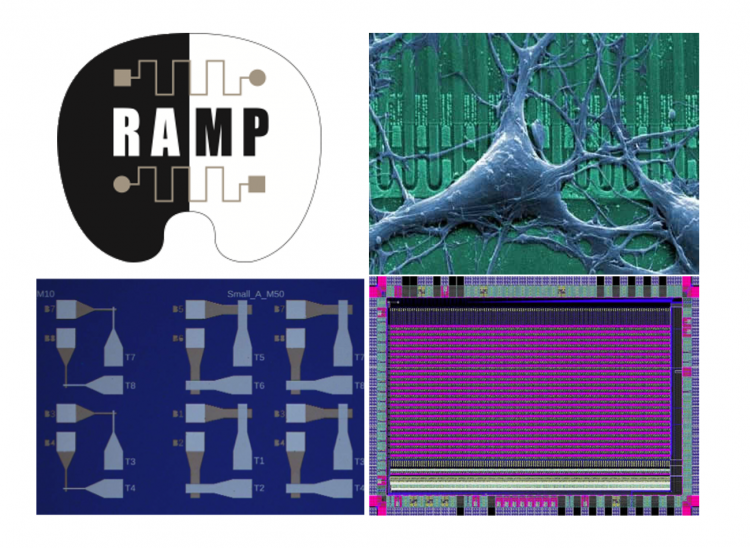 The reason is that the biological brain is configured differently and the key is its evolving structure, where connectivity elements between individual neurons, the synapses, undergo birth and death as well as strengthening and weakening through a selection process, reconfiguring neuronal connectivity in a self-organizing manner and allowing the networked population of neuronal processors to adapt motor and behavioural responses to the ever changing environment.

Artificial neural networks in the form of software run on conventional von Neumann computers appear incomparable to the biological systems in terms of speed, energy efficiency, adaptability and robustness.

The challenge is to built a physical neural network where elements overcome this deficiency by merging data storage and processing into single electronic devices and by self-reconfiguring connectivity.

Along this route, we aim to create a new biohybrid architecture of tightly coupled natural and artificial neurons endowed with plasticity properties.
Communication between artificial and natural worlds will be established through new nano- and microtransducers allowing direct electrical interfacing of a network of neurons in culture to an artificial CMOS-based counterpart.

Adaptation properties of the artificial network will rely on memristive nanoelectronic devices with synaptic-like plasticity and on activity-dependent rearrangement of neuronal connectivity.

As such, the biohybrid system will provide new and unique adaptive, self-organizing and evolving properties deriving from the fusion of natural and artificial neuronal elements into a new plastic entity and will represent a fundamental step towards the development of novel brain-inspired computing architectures as well as intelligent autonomous systems and prostheses.